I Heart NYC, All Over Again 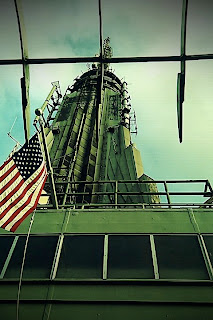 For years, I’ve found reasons why it’s not a good time to take my kid on top of the Empire State Building. It’s too crowded; too expensive; we might run into King Kong; who knows? But last weekend, the opportunity presented itself in a way where everything clicked. It was Friday and Kid had the day off from school. The weather was warm, and we were two blocks away after catching a matinee of the Muppets. Out came the question I’ve heard so many times before: “Can we go to the Empire State Building? I was born here, and I’ve never even been on top of it.” My husband and I looked at each other, shrugged our shoulders, and I said “Sure, why not?” The look of unbridled joy on my kid’s face because he thought he was hearing things– “She said Yes?” –was worth the hefty ticket price to the 86th floor.

Before the ascent, we were greeted by various tour guys trying to sell us tickets for joint bus trips before we had a chance to hit the box office. No, thanks. We were invited to purchase a map so we could know what we were looking at. No, thanks. We know what we’re looking at. In short lines I heard several languages, not surprising. We were officially tourists in our own town.

I have been to the top, but not for close to twenty years, if my sketchy memory serves me correctly. The ear-popping trip up the elevator didn’t take long at all, and once we were outside, the views were staggering. Visibility was excellent, and we could see up the Hudson to the Palisades, down the island to our block, East 4th Street, which was marked by the relatively new Cooper Square Hotel. We saw every bridge crossing the East River, and the Intrepid perched upon the Hudson. The Hearst Tower was easy to spot with its diagrid triangular facade, and Central Park served up fall’s fading colors in a wash of earth tones. The Flatiron Building stood confidently with its narrow facade, where Broadway and 5th Avenue part ways. The archaic-looking wooden water towers speckled the rooftops, daring one to figure out which decade we’re in.

Kid was thrilled that he could poke his hand through the fence and hang it off the building. He spotted things that we hadn’t: the Macy’s windows we had just walked past; tour buses with people’s heads popping out; tiny bicycles.

The best part about it, aside from the obvious part of spending the afternoon with my guys on top of the Empire State Building, was looking down on this perfect city, all of its daily imperfections wiped away by a swath of broad sight lines. It’s everyone’s city to carve out a life as they wish, whether by luck or hard work or simple circumstance, and it can change on a dime from moment to moment, as fast as the clouds’ shadows pour across Central Park before trolling up the Hudson. It’s a dear old friend that I cling to, and every once it awhile it deserves a proper visit.